See our list of guests who appear on podcast episodes

He is known for the nickname of his visual works, Chesty Comix. He’s an emerging artist who is a gay Black man living in Alabama. His creative works feature memorably taboo kinky and sexy images of muscular men of multiple races. Discover how he got started doing 3D digital art and the challenges he overcomes. S02E01.

Here is an eye-opening conversation exploring the taboos of mind-expanding drugs with Jimi Fritz, a writer, musician, filmmaker and entrepreneur. He reveals controversial personal details surrounding his half-century of adventures in buying, selling and consuming psychedelic drugs. He also pinpoints the differences between what he calls “dumb drugs” versus “smart drugs,” and offers rare insights into how writers, musicians, filmmakers and entrepreneurs boost their creative processes with the help of mind-expanding drugs. S02E04.

One young man’s unrelenting rough life forced him to concede that he’s been locked in crushing battles against himself. Listen to Devannon Hubert talk openly and bluntly about his intense real-world struggles with drug dealing, drug addiction, homelessness, serving in the Armed Forces, contracting HIV and HEP B, and rejection from his church for his sexuality. You will not soon forget what he has to say. S02E08.

So often we hear “ask your doctor” about cannabis. Las Vegas medical doctor Carmen Jones of Wildflower Medical Consultants shares direct, down-to-earth information and her candid opinions regarding how you can use legal cannabis products to achieve medical outcomes. She is a game-changing medical doctor in Las Vegas who actually answers questions you choose to ask about cannabis. S02E06.

If you enjoy watching horror genre films, you will want to listen to featured guest Alan Rowe Kelly in S01E02. He started out in show business as a make up artist/hair stylist in Manhattan’s fashion/commercial industry. Today he has a solid reputation in directing, producing and writing screenplays for independent horror films and most notably for his unforgettable acting roles in which he frequently portrays female characters.

Jeremy Norrie of The Sky Island is known for documentaries exploring subjects such as taboo phenomena like UFOs and Bigfoot along with human beliefs and thoughts which determine day-to-day reality. These documentaries are open minded and take serious perspectives on a wide variety of controversial subjects, all of which have a common theme of overcoming adversity, gaining empowerment, and achieving recovery. He reveals how his documentaries are conceived, produced and shared across multiple online platforms. S02E04.

His name is Rictor Riolo, a gay man you may have seen on YouTube shows for many years. Here he openly talks about why he arrived at strong opinions concerning taboo truths that many people believe despite a lack of tangible evidence or logical proofs. He explains how people cling to belief-based truths about politics, religion, and Bigfoot because they are broken and deeply hurt people seeking meaning in their unhappy lives. S01E05.

Renee Schyjer is married to Frederick (“Freddy”) Moore, a rock and roll musician born in 1950 who today is suffering from Alzheimer’s Disease. Renee speaks about day-to-day realities of this incurable disease and the life-changing impact it brings. She aims to break the taboo of talking openly about this fatal brain disease that so often is downplayed or denied. S02E03.

The 3D artist known as Sparkie Shock is best known for his visual works showing male victims bound to a metal frame for up-close observation of their unwilling responses to the shocking effects of electricity upon human anatomy. S01E06.

Annette Houlihan Verdolino is a versatile actress who’s been nicknamed the “secret sauce” of the Vegas theater scene. You’ve seen her performances in Las Vegas burlesque stage shows, in Stephen Sondheim’s Sweeney Todd, and in Oberacker and Taylor’s nightmare musical, The Sandman. Listen to Annette talk openly about revealing your taboo self to yourself and to the world. S02E02

He once was on the air in Texas as a television news anchor. Today he stars in explicit gay adult male videos. Jim Walker lives what some might call a taboo lifestyle and has no regrets. S01E04. 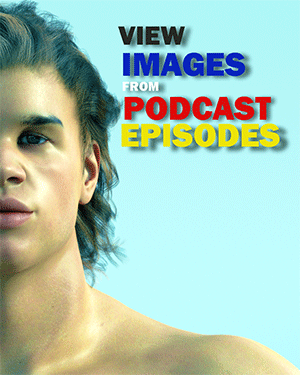 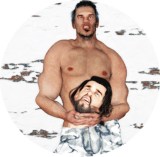